Cornish miner James Snell arrived in Kawau in 1854 and bought Snells Beach. The beach had been known as Long Beach. Dalmatian immigrants would live in tents on the beach and dig for Kauri gum when the tide was out. Maori called the southern adjacent Algies Bay ‘Horahora wai’ meaning encroaching waters. Scottish immigrant Alexander Algie and wife Mina, nee Deerness, bought the land further south near Martins Bay, where his brother Samuel had settled in 1867. The family had a boarding house on the beach during the late 1890s but it had closed by 1941. A metal road was built along the eastern peninsular in the 1930s.

In 1904 Messrs J Clayden and J Parkinson discovered a substantial deposit of kauri gum on the low tide mark at Snells Beach and for three weeks managed to keep it to themselves, enabling them to extract some seven tons of gum. Once the word was out another forty diggers descended on the beach working furiously between tides and achieving good results. Three years later in August 1907 a section of the beach was thrown open to diggers and a rush of two hundred and fifty of them took place. Most were new immigrants and it was reported that about 300 pounds of gum was harvested each week. During the 1930’s when unemployment was high and every means of earning needed to be explored, the area was dug over again and sacks of gum were removed. All this activity must have been somewhat distracting for the Snell descendants who were quietly farming the land the family had owned since 1854. 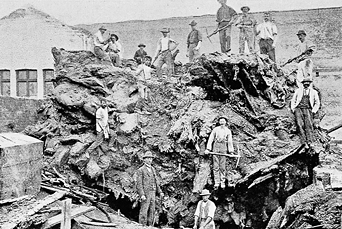 All this activity must have been somewhat distracting for the Snell descendants who were quietly farming the land the family had owned since 1854. The Snells were Cornish folk who came to New Zealand from the mines of South Australia to work at Great Barrier and Kawau Island before settling on the mainland. The Snell homestead stood on land adjacent to the present reserve for more than a century. The kitchen was paved with stone slabs and was separated from the yard by a stable door which was handy to keep children inside while the cows were milked. There was no running water in the house but nearby a spring had been tapped and water flowed down through clay pipes and discharged into a concrete trough. A step up from the kitchen was a large room where church services were held. The minister read from the family bible placed on a lectern on top of a table. A door opened on to the verandah which faced the sea and paths divided flower beds
that were always full of colour. Last of the family to live in the cottage was Miss Lucy Phillips a granddaughter of James and Mary Snell. Her sister Florence ( Mrs Harold Parkes ) lived along the beach and another sister Jane ( Mrs Goodall ) also lived nearby. Harold Parkes took the cream on a horse-drawn sledge to Dawson’s Landing where it was transferred to a launch and taken to the dairy factory at Pukapuka. Later when a factory opened in Warkworth it was taken there.

Even before the days of motor transport picnic parties and summer campers enjoyed Snells Beach. At the southern end the bush clad slopes were used by several Warkworth families each summer and some even erected small baches which had to be removed when the land was sold and the first subdivisions took place. It is still possible to find tiny golden fragments of kauri gum among the sand and shell on the beach, a reminder of the gum digging days and an indication of ancient forests buried deep beneath the surface of the bay.

Reproduced by kind permission of the author Judy Waters, Warkworth and Districts Museum.

Do you have any pictures you would like to submit for publication ?  Please send them to        ianatsnet@gmail.com